On this page I have accumulated some basic climate data for selected cities and regions in Washington State. Washington has a very diverse topography and climate. It is reputed to receive a lot of rain and in some locations it does. In fact on the windward side of the Olympic Mountains a little town called Quinault receives more than ten feet of annual rainfall on average and that is the most of any place in the contiguous 48 states. But there are many places in Washington state that receive less than 10 inches of annual precipitation bringing those areas perilously close to arid climate.

For those considering Washington from more southern locales, understand the entire state of Washington is above the 45th parallel. In fact only three US states are entirely above the 45th, Washington, North Dakota, and of course Alaska. From this northern latitude the climate will be notably cooler than any of the southern states in the USA. The whole state of Washington enjoys long summer days and twilight that lingers past 10pm but on the flip side in the winter, days are short and dark.

So in honor of the wet reputation, I'll start with precipitation. The chart below shows precipitation data for 15 cities and places in Washington State. This is the rainfall and snow water equivalent data. Forks Washington is on the Northwest Tip of the Olympic Peninsula and is one of the wettest places in the 48 contiguous states. Kennewick is the driest on this list and one of Washington's driest places. For Californians I can add a few data points about selected cities in the Golden State for rainfall below the chart for comparison. 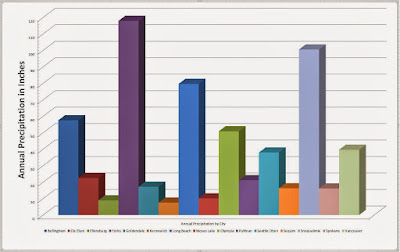 Moving on to snowfall, most people don't think Washington has a reputation for snow. In fact the two snowiest places on Planet Earth are in Washington. Mount Baker broke the world record with a massive 1140 inches in 1998-99. That broke the previous world record held by Paradise, WA near Mount Rainier at 1122 inches in the winter of 1971-72. For people back east, Buffalo, NY holds the record for snow in a large city in a single season at 199.4 inches.

The chart shows the same selected places and their respective average annual snowfall. In fairness, most Washington cities receive less snow than the national average for cities which is 26.6 inches. Spokane is the snowiest city with more than 100,000 people in the state averaging a very Minneapolis -like 44.4 inches. 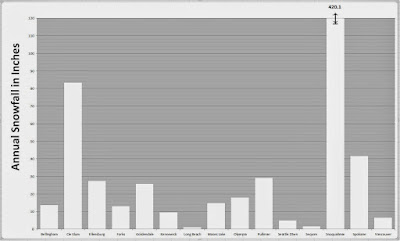 Temperature is the next thing. This is a stat that is hard to quantify because highs and lows are not enough. Averages are simply a collection of extremes and it is the extremes that we tend to worry about. That said the averages are important too as it gives an idea of what a typical day might be like in a particular season. Once again the whole latitude issue pokes its nose into the winter temps. Low hanging sun means temps struggle to rise after a chilly morning low. Southern locales may have upwards of 6 hours where the temp is within 80% of the high for the day. Round these parts you might only get an hour. Take note the January averages are very different in the mountains and east of the Cascades. You pay a temperature penalty in the winter for getting all that sunshine and dry weather. again for Californians some comparative values below the chart. 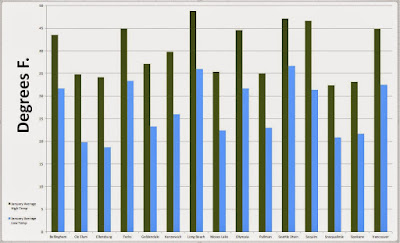 And now the summer; the crown jewels of the Pacific Northwest. Long hours of sunshine leads to linger warm evenings an many parts of Washington State. Glorious it is. again some California comps below the chart. 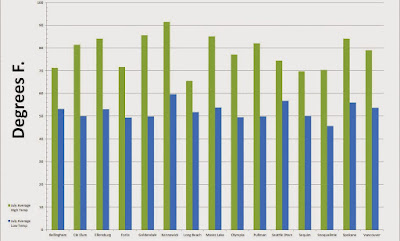 There it is in a short synopsis the climate in Washington State.