Washington State continues to attract retirees more often than any northern state in the US. The lack of a state income tax and breath taking scenery are all part of the allure. This has brought a fair bit of retirement community development to the state. Washington State offers that rare four season climate without the bitter cold winters found in most northern locales. 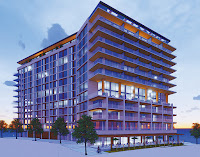 The Springs Living, an Oregon based upscale and full service retirement community developer submitted a pre-app package to the City of Vancouver, WA for a fabulous high rise project on the gorgeous Vancouver Waterfront. this project will feature 200 units from independent living to assisted living, and memory care.

Shea Homes, the developer of the popular Trilogy retirement resort style communities has four communities in Washington State which is as many as most of the sun belt states. Three of the Washington sites are long since sold out. The newest development, Trilogy at Bonny Lake still has new homes available.

Washington is the ultimate northern locale for retirees and the robust economy means your kids and grand-kids may already be here waiting for you!