Notice that Washington State appears on NEITHER list. On the wallet hub list of "Best" places to retire Washington is crushed by it's Number 36 "affordable" ranking and that is driven largely by the atrociously expensive Seattle Metro Area housing costs.

The most popular list has some strange variance from the best list. Vermont is very popular for retirees yet ranks poorly on the best list which measure metrics important to retirees, like health care, weather, housing costs, taxes, etc.

This dynamic shows that some retirees ignore the ratings and go for other reasons, such as proximity to family, weather over all else, air travel corridors to visit family they may be leaving to retire, and so on. Why do so many North Easterners retire to Florida? Many reasons, it is a north south no-time zone flight between the Northeast and Florida. Florida is highly rated for retirees. It is a no brainer, really.

California is a state that is shedding retirees fast. Arizona and Nevada are no doubt popular choices for the exodus of California. Washington State enjoys a similar advantage to Florida for California retirees because of the short north-south flight corridor allowing for easy visits to family and friends left behind. Although California transplants are the #2 source of new residents to Washington State, Oregon remains #1 by a huge margin. Washington is an easy choice to make versus Oregon for retirees. In fact when housing costs are taken out of the equation, Washington State routinely ranks in the top 10 states in America to retire. The beautiful thing about Southwest Washington is that housing costs locally are less than HALF that of Seattle.

Southwest Washington State is regionally superior to Washington State offering all of the Evergreen State benefits without the glaring disadvantage on housing costs. Overall when separating this local area out from the rest of the state, SW Washington would easily land in the top ten best list.

Let's do a scale of 1-10 in Clark County, Washington for retirees compared to other West Coast locales, click on the chart to enlarge. 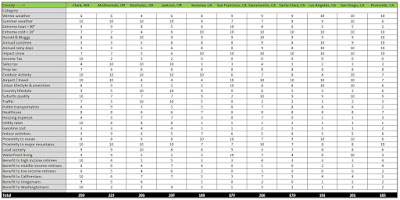 This area continues to be a large draw from West Coast retirees in Oregon and California, be it chasing the kids to better opportunities in retirement, Washington State outside of Seattle is still one the best places in America to retire.
Posted by Rod Sager at 8:30 AM No comments: