There are some who want to retire to a little bit of a "spread." You know, some land, small acreage. You work, commute to a job and then reach a point where it's time to settle in for the golden years on a nice little plot somewhere. Southwest Washington State is an ideal place to do just that.

Although five acreage build able lots have crept up in value over the last 20 years they are still had for $150-$300k depending on location, level, views, perc, etc. Finding a home already built on a five acre parcel is not difficult at the $500k level. Although half a million dollars is steep when measured against the national median home price, it is not too heavy when contrasted against a West Coast typical suburban house in Portland, Seattle or most coastal California areas. A retiree can sell their three bed two bath ranch in the Seattle 'burbs for $450,000 to $650,000 and find a comparative palace on five acres in Battle Ground, WA

Small acreage that is level and grassy will require some maintenance but lots that are heavily treed or steep with a view are easier to maintain in general. The latter however is often less usable land. It all depends are what one is looking for. Use of a large space or privacy. Maybe a little of both. 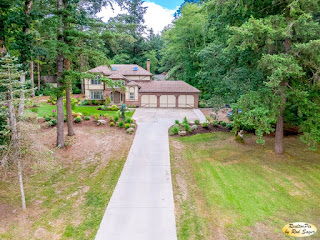 Clark County, Washington offers a great variety of small acreage lots with or without homes and reasonable prices and most importantly, very close in to the city level services. Having a five acre spread and still making it o the airport in 30 minutes is wonderful. Having close in access to medical services and shopping is nice too.

Maybe you don't want five acres. Perhaps an acre is more your style. That's OK as these smaller parcels are around as well. The house shown here is listed at $589k and is a fabulous property with privacy and in real close to freeways and services.

What ever a retiree is looking for there is a great chance it can be found in southwest Washington.